Animal ambassadors play an important role in educating and inspiring zoo visitors to care about wildlife and become proactive in environmental conservation.

Interaction with captive wildlife can be accomplished safely and with full maintenance of comfort for both animals and humans, but it must be done by qualified keepers, with requisite knowledge and experience. AAZ encourages the inclusion of animal ambassadors within the educational programs of its member institutions, done within a strict safety protocol, promoting the wellbeing of both guests and animals.

Famous wildlife host Jim Fowler was an advocate for the use of animal ambassadors, and regularly used them as part of his decades of lectures and television appearances. Read what he has to say on the subject:

"How can we move people's attention away from the unnatural worlds of shopping malls and digital technology and move them to become active in wildlife conservation? Over the past forty years, my experience in a wide range of venues—in schools, in government-policy circles, on television—has been that a live animal does more than anything else to attract people's attention and touch their hearts. Bring the public into the presence of a live animal, and magic happens. People look into the eyes of a tiger or some other beautiful animal and connect, most of them for the first time, with what we mean by "the natural world." More times than I can count, people have come up to me and said their interest in saving wildlife began when they attended a lecture where I brought out a species of animal they had never met before." 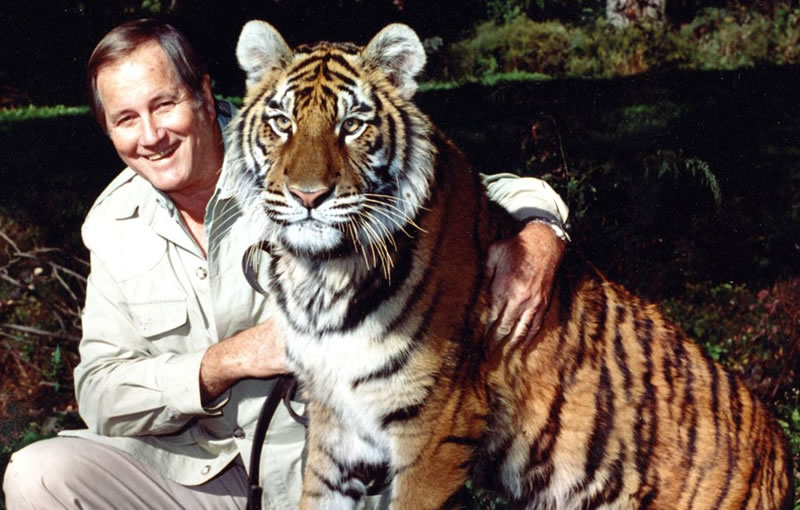 Some organizations claim that there should be no such interaction between people and endangered animals such as tigers. They say that predators belong in the wild and that bringing big cats into captivity and permitting people to have unobstructed contact with them is dangerous. This is simply not true. When managed by properly trained staff, private preserves are not dangerous. In almost every instance, when an animal has escaped enclosure, it is because someone without proper training was left in charge. Newspapers and television exaggerate the statistics, play up the drama of the rare occasion when this happens, and arouse irrational fears. The instances of attack by a big cat are minuscule compared with, for instance, deaths from lawn mowers (two thousand in 2009) or from riding horses (eight hundred that same year). Television reports hype the few instances of escape by a big cat and rile up the public, who then demand legislation that ironically could drive big cats into extinction. That cycle can only be corrected when we come to value the vital role of private preserves.

Humans have lived with dangerous animals on this planet for a long time, yet we are so disconnected from them that we have lost the admiration, awe, and mutual respect that for centuries characterized our relationship with wildlife. Recently, I saw an article describing how grizzlies are getting more dangerous in Yellowstone National Park. The reporter said nothing about the important role they play in the park's ecosystem or how inspiring it is to actually see grizzlies. Played up were the few instances when a grizzly came into a campground and hurt or killed someone.

When that side alone is represented in the press, then regulatory agencies step in to limit wild animals' transportation from one venue to another, restrict their breeding, or prohibit their exhibition. Without a balanced picture, these agencies have only extreme cases on which to base their policies, and their actions often place onerous restrictions on preservation efforts. When a rich person irresponsibly takes a mountain lion for a ride in a convertible, risking the animal's jumping out of the car, it is not the mountain lion population that should have to pay for such foolishness.